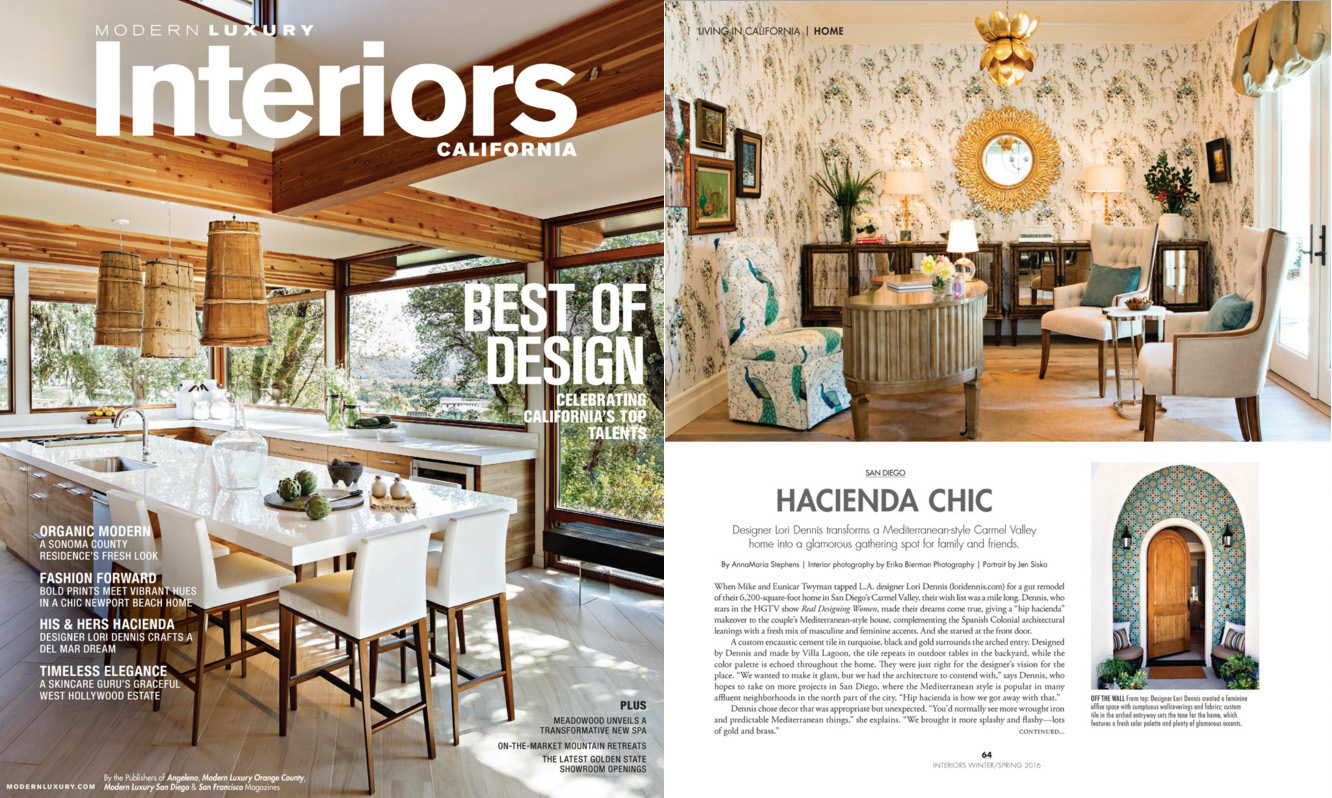 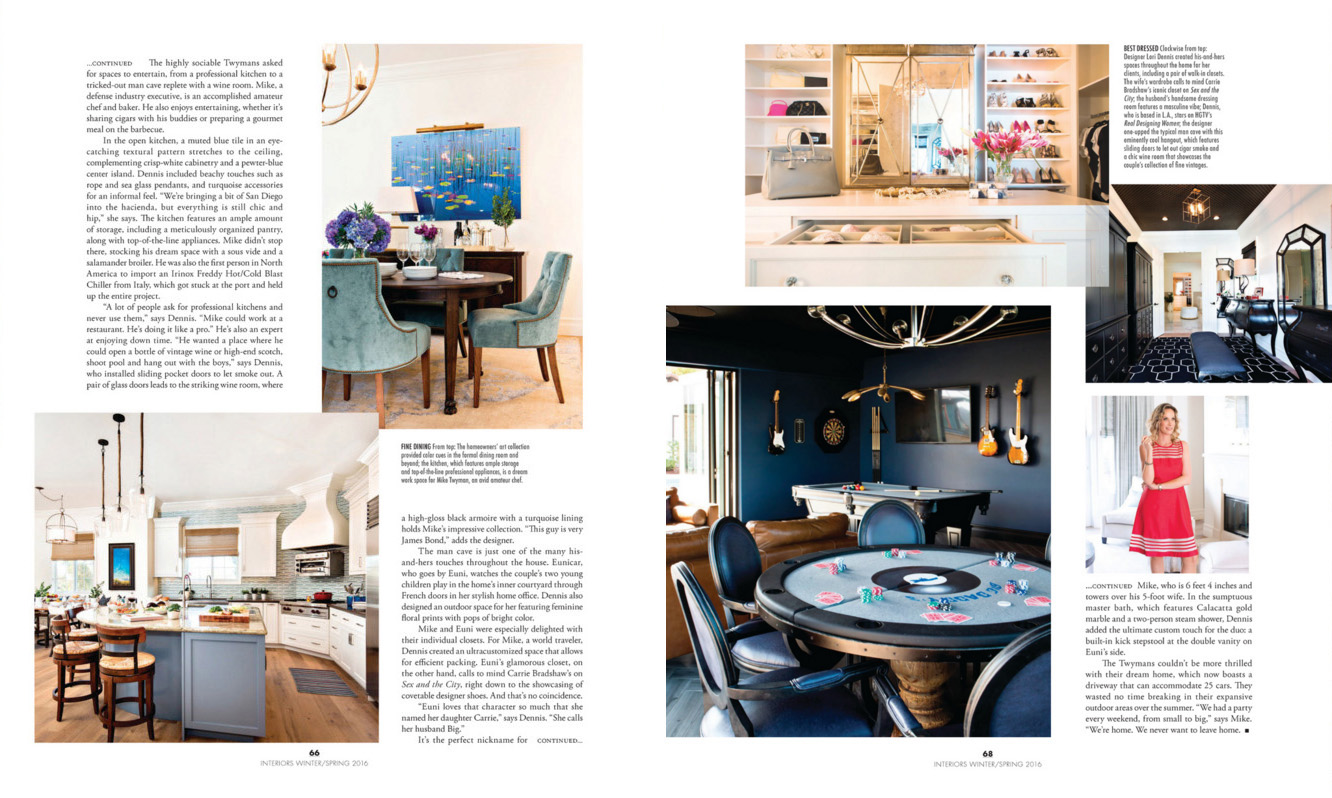 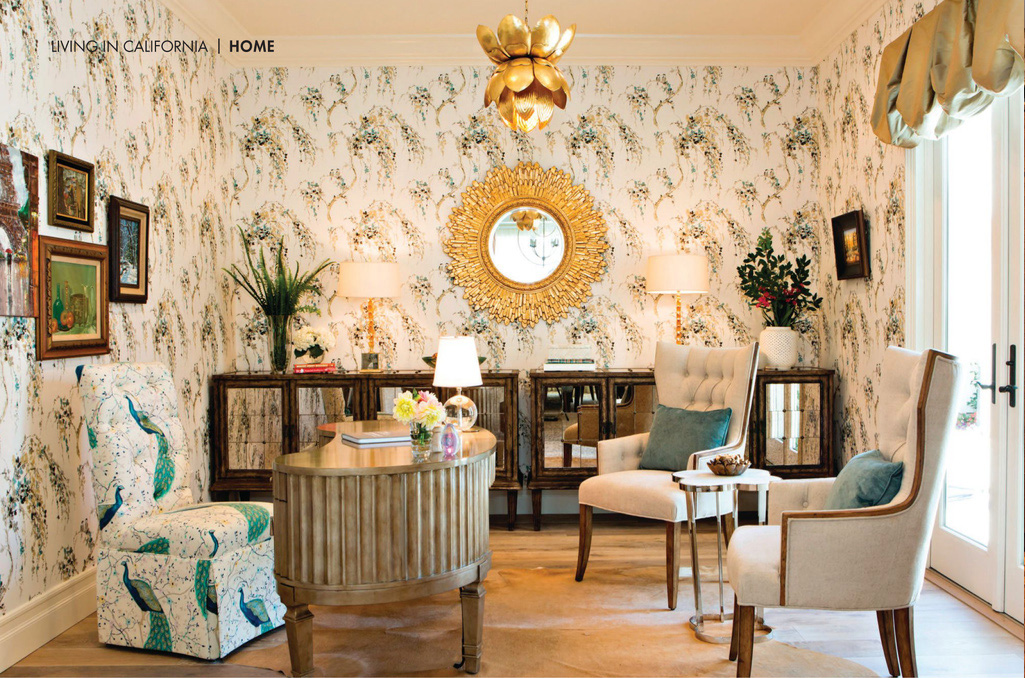 W hen Mike and Euni Twyman tapped LA designer Lori Dennis, loridennis.com, for a gut remodel of their 6,200 square foot home In San Diego’s Carmel Valley, their wish list was a mile long.  Dennis who stars in HGTV show Real Designing Women made their dreams come true, give a “hip hacienda” makeover to the couple’s Mediterranean style house, complementing the Spanish Colonial architecture leanings with a fresh mix of masculine and feminine accents.  And she started at the front door.    A custom encaustic cement tile in turquoise, black and gold surrounds the arched entry.  Designed by Dennis and made by Villa Lagoon, the tile repeats in outdoor tables in the backyard, while the color palette is echoed throughout the home.  They were just right for the designer’s vision for the place. “ We wanted to make it glam, but we had the architecture to contend with,” says Dennis, who hopes to take on more projects in San Diego, where the Mediterranean style is popular in many affluent neighborhoods in the north part of the city. “ Hip Hacienda is how we got away with that.”   Dennis chose décor that was appropriate but unexpected. “You’d normally see more wrought iron and predictable Mediterranean things,” she explains.  “We brought it more splashy and flashy, lots of gold and brass.” 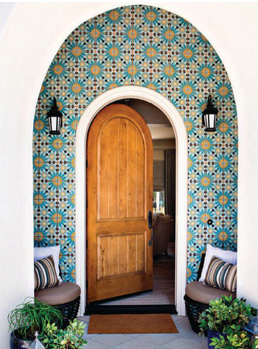 Custom tile in the arched entryway sets the tone for the home, which features a fresh color palette and plenty of glamorous accents.

The highly sociable Tyman asked for spaces to entertain, from a professional kitchen to a tricked-out man cave replete with a wine room.  Mike, a defense industry executive, is an accomplished amateur chef and baker.  He also enjoys entertaining, whether it’s sharing cigars with his buddies or preparing a gourmet meal on the barbeque. In the open kitchen, a muted blue tile an eye catching textural pattern stretches to the ceiling, complementing crisp-white cabinetry and pewter-blue center island. Dennis includes beachy touches such as rope and sea glass pendants and turquoise accessories for an informal feel. “We’re bringing a bit of San Diego into the hacienda., but everything is chic and hip,” she says. The kitchen features an ample of storage, including a meticulously organized pantry, along with top of the line appliances. Mike didn’t stop there, stocking his dream space with a sous vide and a salamander broiler.  He was also the first person in North America to import an Irinox Freddy Hot/Cold Blast Chiller from Italy, which got stuck at the port and held up the entire project. “ A lot of people ask for professional kitchens and never use them, “ says Dennis.  “Mike could work a restaurant. He’s doing it like a pro.” He’s also an expert at enjoying down time. “ He wanted a place where he could open a bottle of vintage wine or high end scotch, shoot pool and hang out with the boys, “ says Dennis, who installed sliding pocket doors to let smoke out. A pair of glass doors leads to the striking wine room, where a high gloss black armoire with a turquoise lignin hold Mike’s impressive collection.” This guy is very James Bond,” adds the designer. 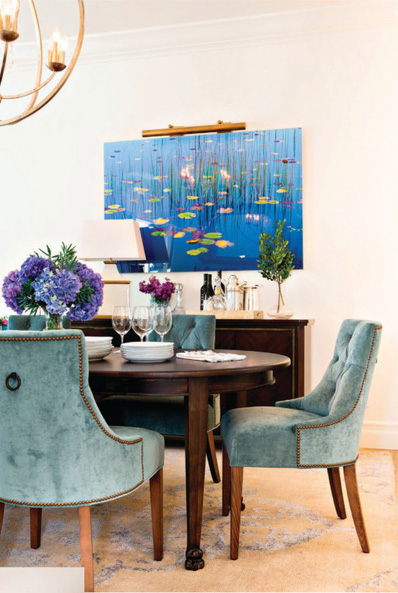 FINE DINING:  The homeowner’s art collection provided color cue in the formal dining and beyond.

The man cave is just one of the many his and her touches throughout the house. Eunicar; who goes by Euni, watches the couple’s two young children play in the home’s inner courtyard through French doors in her stylish home office. Dennis also designed an outdoor space for her featuring feminine floral prints with pops of bright color.   Mike and Euni were especially delighted with their individual closets. For Mike, a world traveler, Dennis created and ultra customized space that allows for efficient packing.  Euni’s glamorous closet, on the other hand, calls to mind Carrie Bradshaw’s on Sex and the City, right down to the showcasing of covetable designer shoes.  And that’s no coincidence.  “Euni loves that character so much that she named her daughter Carrie,” says Dennis. “She calls her husband Big.” 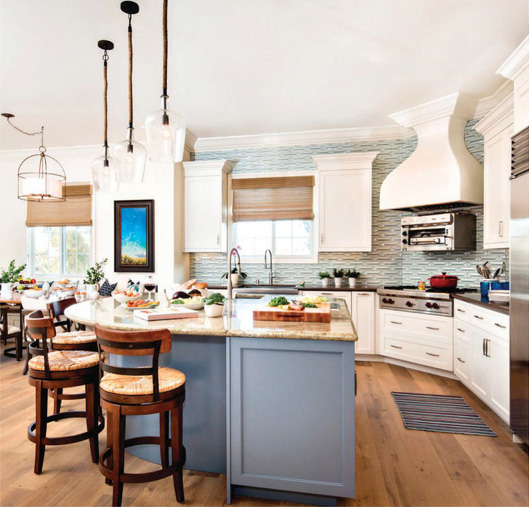 KITCHEN: The kitchen, which features ample storage and top of the line professional appliance, is a dream workspace for Mike Twyman, an avid amateur chef. 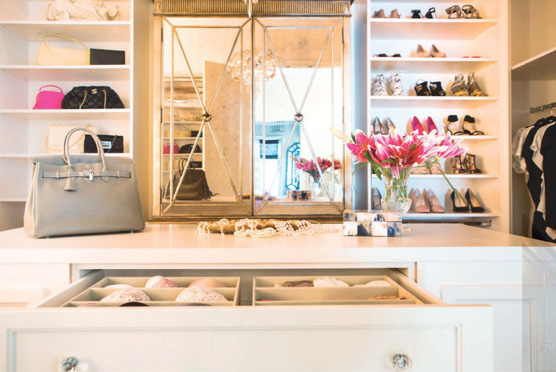 BEST DRESSED: Designer Lori Dennis creates his and hers spaces through out the home fro her clients. The wife’s wardrobe calls to mind Carrie Bradshaw’s closet on Sex and the City. 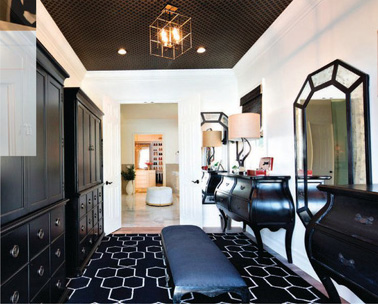 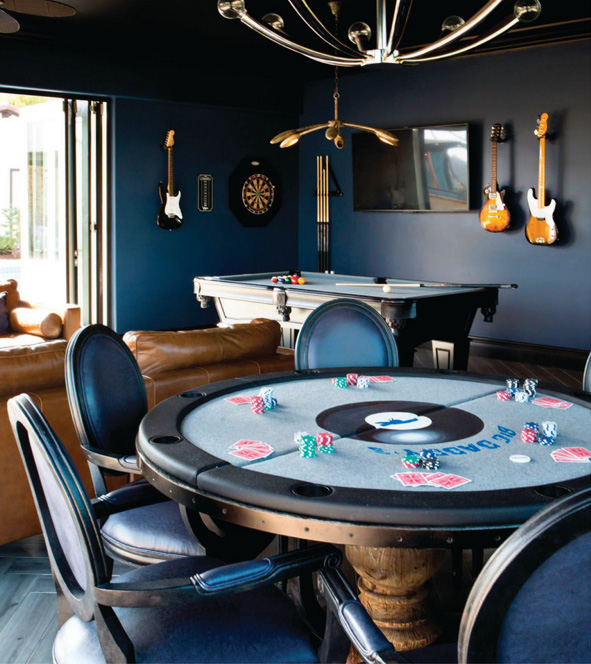 MAN CAVE: The interior designer one upped the man cave with this cool hangout, which features, bi-fold doors, a wine room and show cases the couple’s collection of fine vintages. 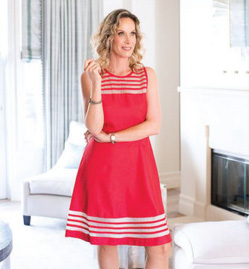 It’s the perfect nickname for Mike who is 6 feet 4 inches and towers over his 5-foot wife. In the sumptuous master bath, which features Calcutta gold marble and a two person steam shower, Dennis added the ultimate custom touch for the duo, a built in kick step stool at the double vanity on Euni’s side. The Twyman’s couldn’t be more thrilled with their dream home, which now boasts a driveway that can accommodate 25 cars. They wasted no time breaking in their expansive outdoor areas over the summer. “We had a party every weekend, from small to big,” says Mike. “We’re home. We never want to leave home.”

We are delighted to be featured as one of San Diego’s best contractor, for our Villa Del Sur residential renovation project in North, San Diego.  The 6,200 Spanish style home was gutted and remodeled including a smart home system, chef’s kitchen, steam showers, custom designed closets and wine cellar.