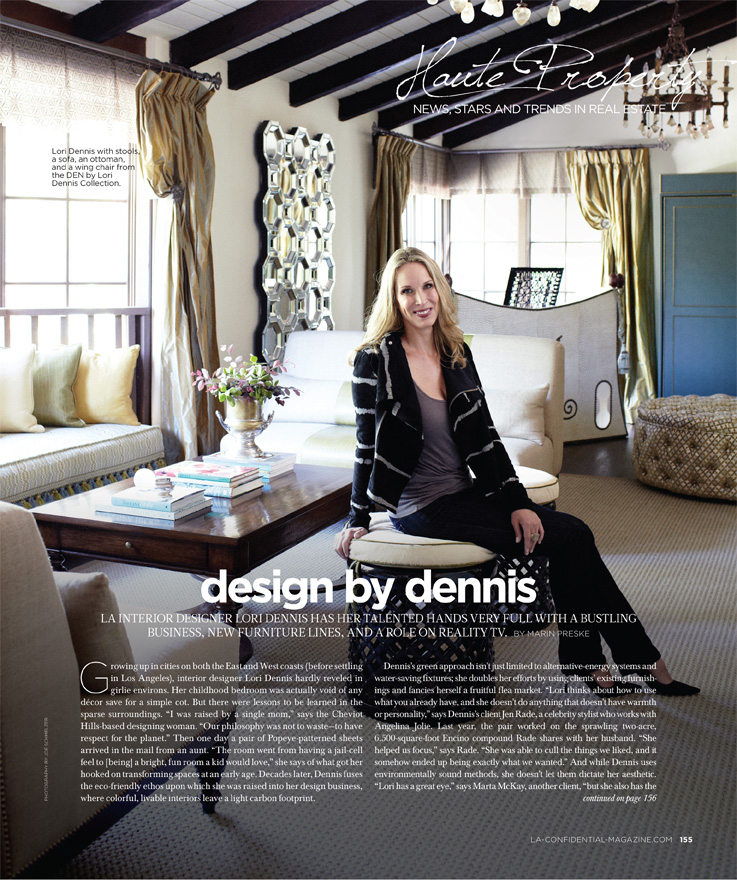 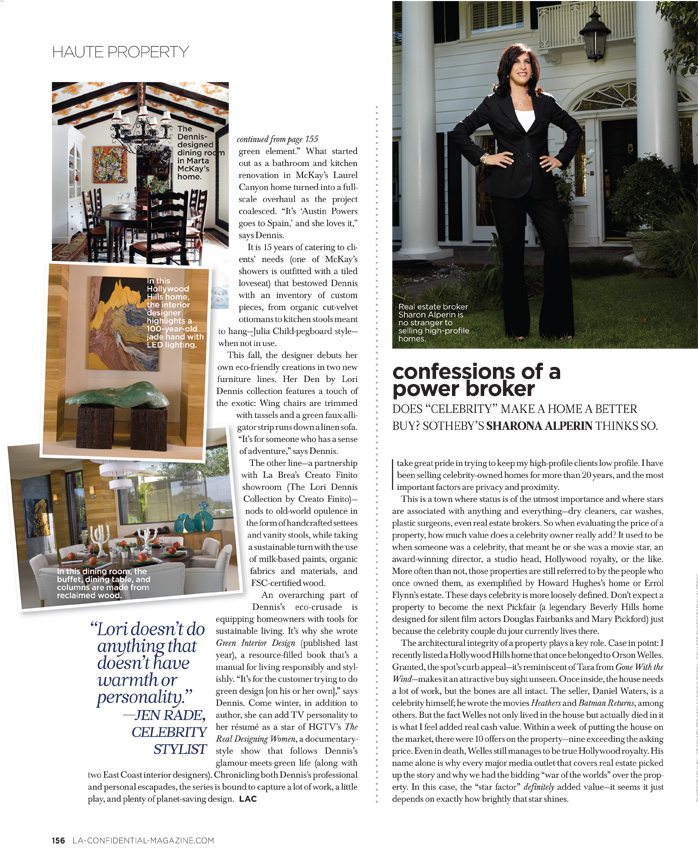 Growing up in cities on both the East and West coasts (before settling in Los Angeles), interior designer Lori Dennis hardly reveled in girlie environs. Her childhood bedroom was actually devoid of any décor save for a simple cot. But there were lessons to be learned in the sparse surroundings. “I was raised by a single mom,“ says the Cheviot Hills based designing woman. “Our philosophy was not to waste—to have respect for the planet.” Then one day a pair of Popeye, pattemed sheets arrived in the mail from an aunt . The room went from having a jail cell feeling, to being a bright, fun room a kid would love,” she says of what got her hooked on transforming spaces at an early age. Decades later. Dennis fuses the eco friendly ethos upon which she was raised into her design business, where colorful, livable interiors leave a light carbon footprint.

Dennis’ green approach isn’t just limited to alternative energy and water saving fixtures, she doubles her efforts by using clients existing furnishings and fancies herself a fruitful flea market. “ Lori thinks about how to use what you already have, and she doesn’t do anything that doesn’t have warmth or personality,” says Dennis client, Jen Rade, a celebrity stylist who works with Angelina Jolie. Last year. the pair worked on the sprawling , two acre, 6.300.square foot Encino compound Rade shares, with her husband. ‘She helped us focus,” says Rade. “She was able to cull the things we liked. and it somehow ended up being exactly what we wanted.” And while Dennis uses environmentally sound methods, she doesn’t let them dictate her aesthetic. “Lori has a great eye,” says Marta McKay, another client, “but she also has the green element.” What started out as a bathroom and kitchen renovation in McKay’s Laurel Canyon home turned into a full-scale overhaul as the project coalesced. “It’s ‘Austin Powers goes to Spain,’ and she loves it,” says Dennis.

It is 15 years of catering to clients’ needs (one of McKay’s showers is outfitted with a tiled loveseat) that bestowed Dennis with an inventory of custom pieces, from organic cut-velvet ottomans to kitchen stools meant to hang—Julia Child-pegboard style—when not in use.

This fall, the designer debuts her own eco-friendly creations in two new furniture lines. Her Den by Lori Dennis collection features a touch of the exotic: Wing chairs are trimmed with tassels and a green faux-alli-gator strip runs down a linen sofa. “It’s for someone who has a sense of adventure,” says Dennis.

The other line—a partnership with La Brea’s Creato Finito showroom (The Lori Dennis Collection by Creato Finito)— nods to old-world opulence in the form of handcrafted settees and vanity stools, while taking a sustainable turn with the use of milk-based paints, organic fabrics and materials, and FSC-certified wood.

An overarching part of Dennis’s eco-crusade is equipping homeowners with tools for sustainable living. It’s why she wrote Green Interior Design (published last year), a resource-filled book that’s a manual for living responsibly and stylishly. “It’s for the customer trying to do green design [on his or her own],” says Dennis. Come winter, in addition to author, she can add TV personality to her résumé as a star of HGTV’s The Real Designing Women, a documentary-style show that follows Dennis’s glamour-meets-green life (along with two East Coast interior designers). Chronicling both Dennis’s professional and personal escapades, the series is bound to capture a lot of work, a little play, and plenty of planet-saving design. LAC

“Lori doesn’t do anything that doesn’t have warmth or personality.” -JEN RADE, CELEBRITY STYLIST

Captions:
Lori Dennis with stools and sofa, an ottoman. and a wing chair from DEN Lori Dennis Collection.

In this Hollywood Hills home, the interior designer highlights a 100-year-old jade hand with LED lighting.

In this dining room; Fie buffet, dining table, and columns are made from reclaimed wood.

Celebrity interior designer, and our interiors partner, Lori Dennis is showcased in this article featuring our Cub Laurel Canyon and Hollywood Hills projects. The article discusses our reality TV show,  an HGTV hit, the Real Designing Women and reveals some of the secrets of the best contractors in Los Angeles on how to properly build hillside properties.