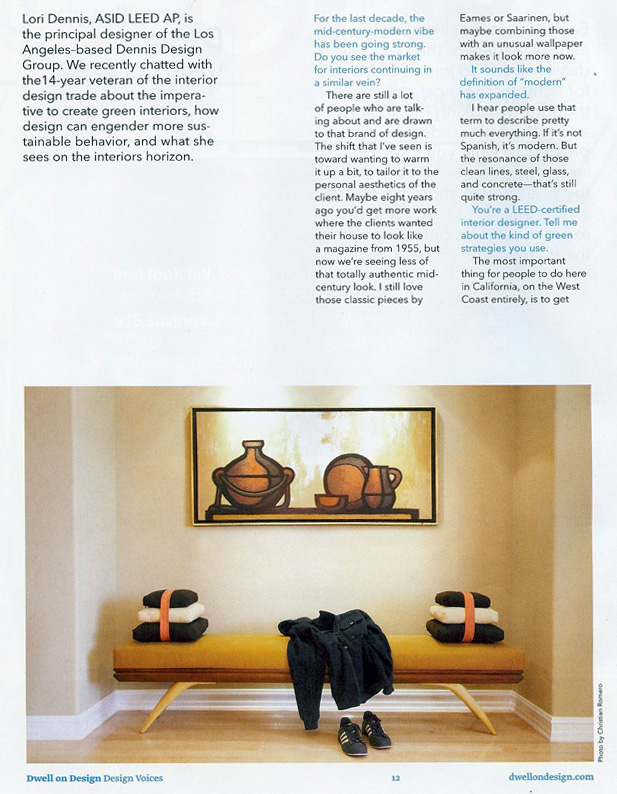 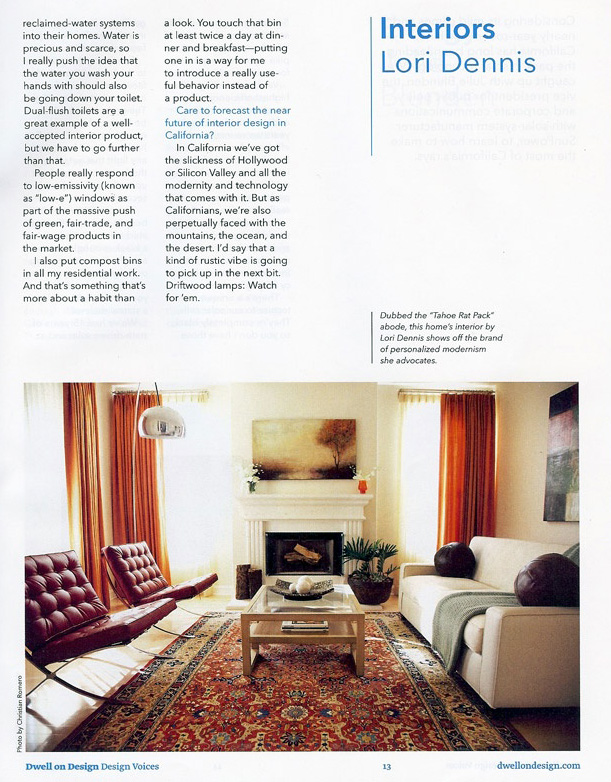 Lori Dennis, ASID LEED AP, is the principal designer of the Los Angeles-based Dennis Design Group. We recently chatted with the 14-year veteran of the interior design trade about the imperative to create green interiors, how design can engender more sustainable behavior, and what she sees on the interiors horizon.

For the last decade, the mid-century-modern vibe has been going strong. Do you see the market for interiors continuing in a similar vein?

There are still a lot of people who are talking about and are drawn to that brand of design. The shift that I’ve seen is toward wanting to warm it up a bit, to tailor it to the personal aesthetics of the client. Maybe eight years ago you’d get more work where the clients wanted their house to look like a magazine from 1955, but now we’re seeing less of that totally authentic mid-century look. I still love those classic pieces by Eames or Saarinen, but maybe combining those with an unusual wallpaper makes it look more now.

It sounds like the definition of “modern” has expanded.

I hear people use that term to describe pretty much everything. If it’s not Spanish, it’s modern. But the resonance of those clean lines, steel, glass, and concrete—that’s still quite strong.

You’re a LEED-certified interior designer. Tell me about the kind of green strategies you use.

The most important thing for people to do here in California, on the West Coast entirely, is to get reclaimed-water systems into their homes. Water is precious and scarce, so I really push the idea that the water you wash your hands with should also be going down your toilet. Dual-flush toilets are a great example of a well-accepted interior product, but we have to go further than that.

People really respond to low-emissivity (known as “low-e”( windows as part of the massive push of green, fair-trade, and fair-wage products in the market.

I also put compost bins in all my residential work. And that’s something that’s more about a habit than a look. You touch that bin at least twice a day at din-ner and breakfast—putting one in is a way for me to introduce a really use-ful behavior instead of a product.

Care to forecast the near future of interior design in California?

In California we’ve got the slickness of Hollywood or Silicon Valley and all the modernity and technology that comes with it. But as Californians, we’re also perpetually faced with the mountains, the ocean, and the desert. I’d say that a kind of rustic vibe is going to pick up in the next bit. Driftwood lamps: Watch for ’em.

Dubbed the “Tahoe Rat Pack” abode, this home’s interior by Lori Dennis shows off the brand of personalized modernism she advocates.

Lori Dennis, one of America’s most famous interior designers and our partner, discusses eco-friendly and sustainable building practices and materials.  The home we built for a technology executive is highlighted.